Consequently, the journal is made an unwitting accomplice to denial. We must be concerned about the erosion of our academic freedom and freedom of speech and should take all measures necessary to protect both. That means preserving even the right, as is often the case, to be utterly wrong. Alongside that extraordinary category of rights, we must work even harder to take academic responsibility and enforce upon ourselves disciplinary rules and community-defined ethics.

We should never confuse that act with censorship, self or otherwise, but rather see it as the fullest expression of our academic freedom. Pierre Vidal-Naquet notes in his work on Holocaust denial, The Assassins of Memory ,"It is not enough to be on the right side of the issue. What is needed is ceaseless work, the establishment of facts, not for those who know them and who are about to disappear, but for those who are legitimately demanding as to the quality of the evidence.

First, how is it that a person who has already praised a book on its back cover is asked to review it in IJMES?

Is it not tantamount to support for a promotional proclivity or, perhaps, even an example of blatant conflict of interest that prefigures in the tone and texture of the review? Second, it is critical to note that Gunter, the reviewer, occupies a central place in the massive campaign—ardently promoted by successive Turkish governments—to deny the Armenian genocide.

For decades he supported that campaign even though he has not produced a single work with a focus on this subject. 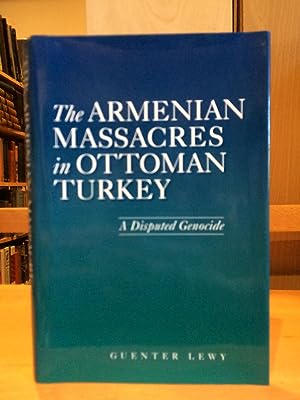 Gunter has published two studies, Transnational Armenian Activism and "Pursuing the Just Cause of Their People": A Study of Contemporary Armenian Terrorism , as well as several essays that examine alleged Armenian"terrorism"—but none of his work was on the genocide, either directly or indirectly. Such lack of specialized competence in and of itself certainly does not, and should not, disqualify a reviewer from engaging in a reasonably crafted assessment if everything else falls into its proper place.

Unfortunately, this predicament is compounded, not mitigated, by the attendant fact that Gunter has placed himself in the forefront of a parallel campaign to promote, directly and indirectly and with remarkable zeal, the"official" Turkish line of denial of the Armenian genocide resmi tarih. This is more significant when one considers that a host of Turkish historians, free from the shackles of the official line, are not only refusing to deny the genocide but in one way or another are also recognizing its occurrence.

In light of these views, Gunter's exaltation of the volume—in such terms as a hallmark of"academic objectivity and courage" and"no other comparable work that so objectively and thoroughly reviews and analyses"—calls for a closer examination of Guenter Lewy and his book. One is dealing here with a book whose author admits a lack of familiarity with both Ottoman and Turkish languages. Lewy declares that he does not know Turkish at all and that he had to depend on"two Turkish speaking persons" p. However, departing from a very common standard procedure, Lewy repeatedly avoids identifying those who, he says, helped him in the matter of translation of numerous documents.

Would it be unfair to ask, under these circumstances, why go to such a highly unusual act of withholding? Oblivious to this serious problem, Lewy then proceeds to take to task almost everyone who has published extensively on the Armenian genocide. Topping this list is, of course, Vahakn N.

Dadrian, who, Lewy admits, is his special target p. Not knowing Turkish, Lewy in an endnote p.

Dadrian not only quoted this item separately and identified it in an extra separate endnote "Ottoman Archives and Denial of the Armenian Genocide," in ed. Martin's Press, ], —, n. This single case of distortion, if not outright falsehood, illustrates the level of scholarship present in the work. Incidentally, this is the same Dadrian whose three separate monographs—presumably scrutinized by several anonymous reviewers as IJMES protocol requires—were published in this journal [], [], and []. For all of these"accomplishments," Lewy has been amply rewarded by Turkish authorities in Ankara and abroad through the launching of a massive campaign to distribute his book free of charge to libraries and to select groups of diplomats.

It may be worth noting that ASAM is a well-known organization whose mission includes the systematic denial of the Armenian genocide through propagandistic and partisan research and publications; the organization is sponsored and underwritten by the Turkish government. Again, none of these facts is indicated in the review as Gunter chooses not to disclose them. Superseding in import all these tribulations is, of course, the fundamental issue of the scholarly value of the book and the related matter of the competence of its author.

Taking full advantage of the fact that the voluminous corpus of Turkish Military Tribunal files mysteriously disappeared following the capture of Istanbul by the insurgent Kemalists in the fall of , Lewy in monotonous refrain repeats the standard argument—"the original is missing"—as if every single reference to all these documents was a deliberate and malicious fabrication. A case in point is the detailed narration of the organization and execution of the Armenian genocide by General Mehmet Vehip, the commander-in-chief of the Turkish third Army.

The bulk of the Armenian population of the Ottoman Empire was subject to the military jurisdiction of that army, and the most gruesome and inexorable aspects of the genocide were inflicted upon that population—prior to Vehip's taking over the high command. The general's detailed account is not only prima facie evidence of the great crime, but it is also testimony to the uprightness and decency of a Turkish military commander—unfortunately a rarity of rarities in the all-consuming atmosphere of state-sponsored denials.

Even though the original is missing, the full text was read into the record of the court-martial proceedings on 29 March , with portions of it having been published in Ta vim-i Va ayi[hamza ] , the government's official gazette no. This entire text was also published in the April issues of the French-language but Turkish-owned newspaper Le Courrier de Turquie , as well as in Va it , a Turkish daily, on 31 March The utterly partisan thrust of Lewy's book has proven to be its very undoing as revealed by the countless factual and historical errors punctuating it.

Still, the errors in the Lewy volume are not only factual and historical but also include mistranslations and misquotations see the Istanbul weekly Agos , June, July, and early August issues in Finally, in his review, Gunter notes that"Lewy finds most valuable…the consular reports…of Leslie A. Davis, the wartime American Consul in Harput.

The Number of Victims Why do Turks continue to maintain their innocence in the face of so much evidence? Armenians also have documented well that they sometimes gave as good as they received. The Massacres of 4. Length: 2, words. This book is not yet featured on Listopia. Oblivious to this serious problem, Lewy then proceeds to take to task almost everyone who has published extensively on the Armenian genocide.

Of special importance are accounts of his visits to several mass execution sites, one of the few such reports available from any source. In that pungent summary report, Davis"estimated that the number is not far from a million," when giving an approximation of the magnitude of Armenian victims. He also emphasized that the massacres were not all perpetrated"by bands of Kurds," as so emphatically claimed by Lewy pp.

Add to Watchlist. People who viewed this item also viewed. Picture Information. Have one to sell? Sell now - Have one to sell? Get an immediate offer. Get the item you ordered or get your money back. Learn more - opens in new window or tab. Seller information greatbookprices2 Contact seller. Visit store.

The Armenian Massacres in Ottoman Turkey: A Disputed Genocide

See other items More See all. Item Information Condition:. Sign in to check out Check out as guest. The item you've selected was not added to your cart.

The Armenian Massacres in Ottoman Turkey

Going After a Scholar's Critic

On April 24, thousands of Armenians suspected of harbouring nationalist sentiments and being hostile to Ottoman rule were rounded up. The Armenian population of Anatolia and Cilicia, labelled "the enemy within", was forced into exile in the Mesopotamian desert. A large number were killed on the way or in the detention camps. Many were burned alive, drowned, poisoned or fell victim to disease, according to foreign diplomats and intelligence services at the time.

The Ottoman Empire was dismantled in , two years after the creation of an independent Armenian state in May A UN convention defines genocide as acts "committed with intent to destroy, in whole or part, a national, ethnical, racial or religious group". Turkey accepts today that massacres were carried out and that many Armenians were killed while being deported, but is adamant this was not genocide.